In spite of significant weather loss during the engineering nights scheduled for the AdSec-DX checkout, we were able to check the system out in all four binning modes and the system showed reliability and stability.

From the tests made, the system is deemed in a reliable enough state for the upcoming PISCES run, scheduled for 7 nights (Oct 8 to 15).

A pre-run engineering night scheduled for PISCES checkout will allow for more tests of the secondary mirror.

Note: This blog is likely to come to an end soon!
Posted by the LBTO broadcaster at 6:32 AM 1 comment:

Another important step in the AdSec-DX recovery effort was reached on Sep 15, when the unit with its new shell (TS4) saw a real star for the first time.


Starting on Oct 13, three days of intense work were spent installing, testing and tuning the various reconstructors prepared in Arcetri by our Italian colleagues, and computing interaction matrices... A mask was also installed, as planned, on the thin shell central hole dust cover to hide the mouse hole. 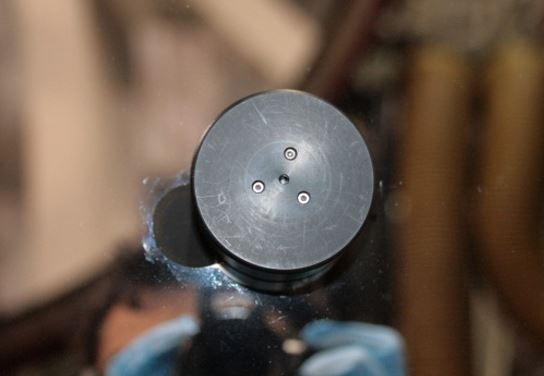 The dust cover before the installation of the mask. The mouse hole is seen on the left of the cover 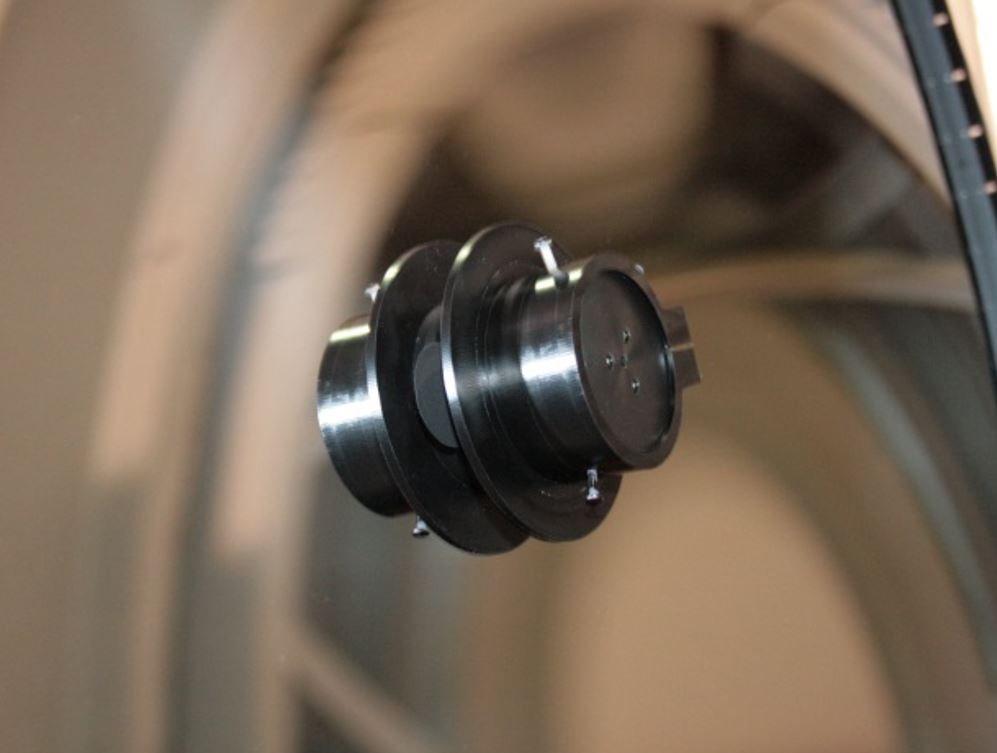 The mask is now clamped on the dust cover, covering the mouse hole

On Sep 15, day-time results looked very promising and the team went to the sky for nearly two hours of clear weather before observations had to stop for high humidity for the rest of the night. The new reconstructor slaving all actuators of the internal ring was used on a Rmag = 6.7 with seeing values in a range from 1.0 to 1.8 arcseconds. Correcting for 400 modes yielded the image below. The strehl ratio in H is 87%. 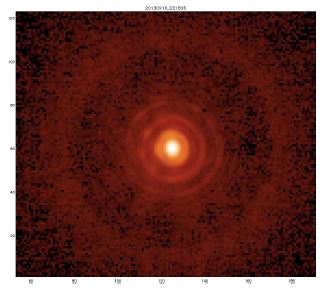 The good news is that the modal basis, optical masking, and WFS digital masking introduced in the new AO software are able to deal with the warping of TS4 in the central region.

Posted by the LBTO broadcaster at 5:35 PM No comments:

On the telescope - Phase 1

AdSec-DX went on the telescope in its hub as planned on Aug 21. It looked like a nice little telescope on top of a big one, as you can see below... 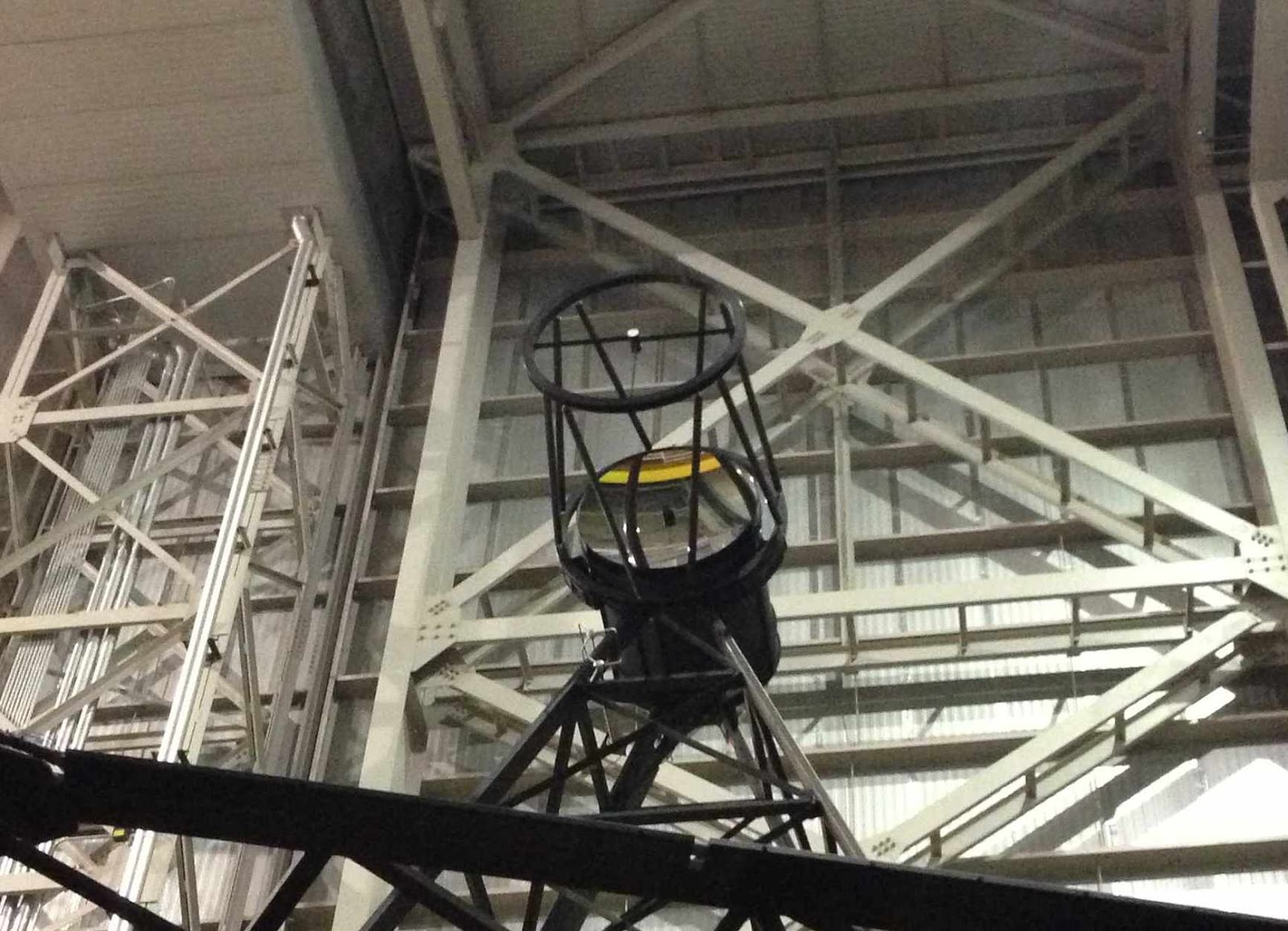 The structure mounted on the hub of the secondary mirror is supporting a retroreflector which was used for all the tests made over the last week to recalibrate the AdSec: it was for the Thin Shell #3 (TS3) the first time it would be checked and characterized as a mirror for an active secondary.

The tests and calibration were made with a 4D laser interferometer. The series of three pictures below shows the evolution from the initial pupil (on the left) to what was achieved with 100 modes (on the right). 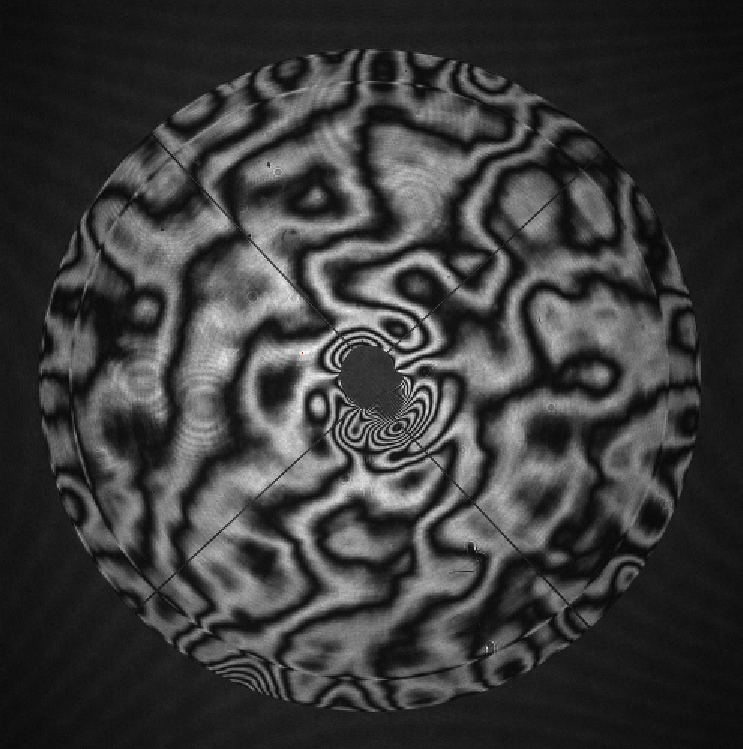 It became cleat that the mouse hole was likely going to be a problem. The area around it requires too high forces to be flattened. A close-up on the central hole and its mouse hole is seen below. 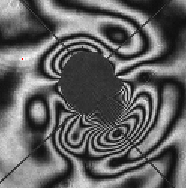 A first pass at 600 modes while masking a central area slightly larger than the central obscuration of the telescope produced a mirror flattened as shown below. 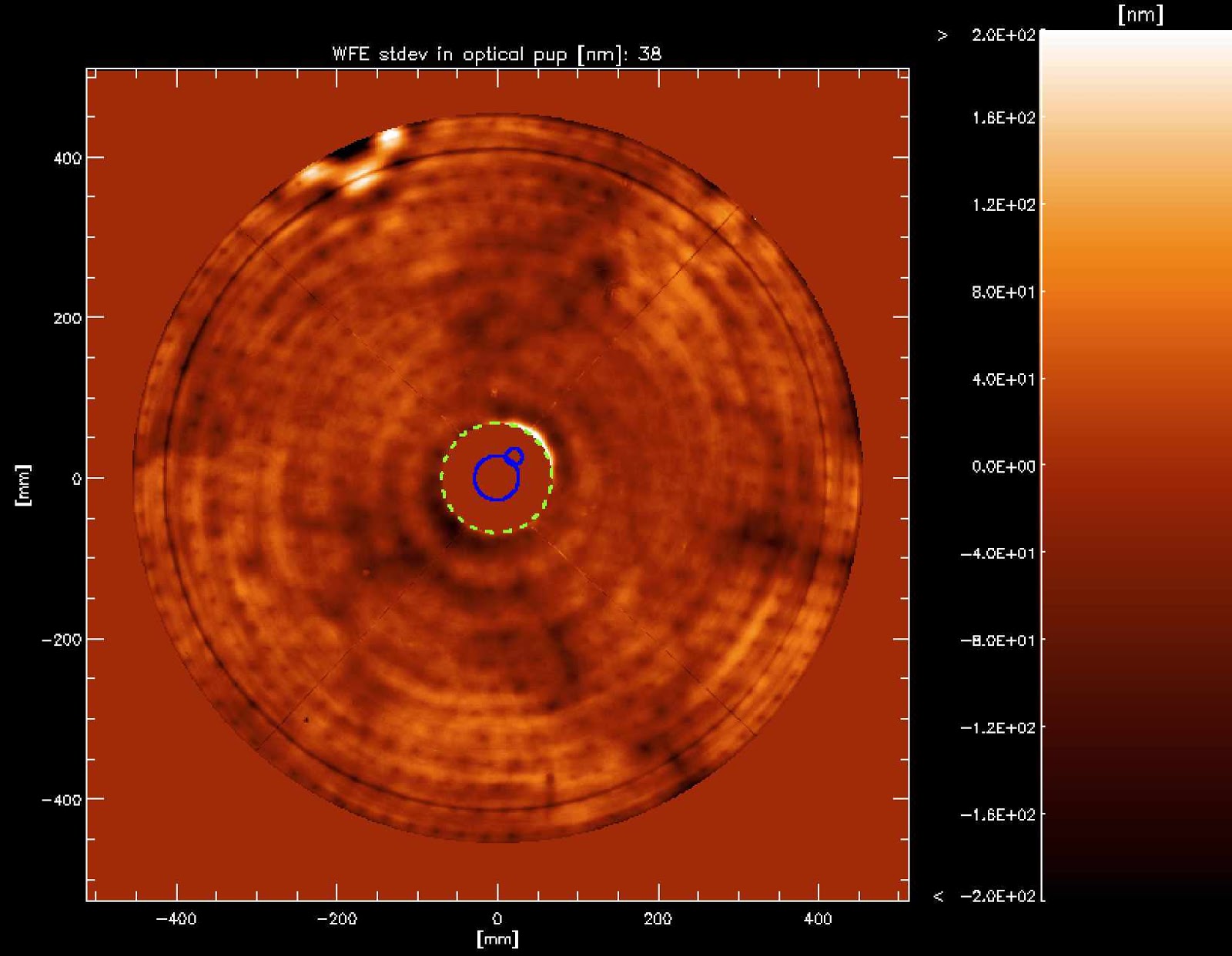 The feature at the top-left external edge is due to a sequence of three clustered not working (therefore disabled) actuators. The previously known circular defect (groove) close to the external edge is also evident. The groove is about  5mm thick (FWHM) and about 100nm deep (WF).

More tests were made and a lot of data were taken to prepare the simulation and preparatory work needed to use TS3 for AO corrections. A refined flattening scheme was devised which ended up with a flattened mirror shown below. It has a wave front error of 29nm rms, matching what was found for TS4 (the shell TS3 is replacing) and TS5 (the shell on the left side of the telescope). 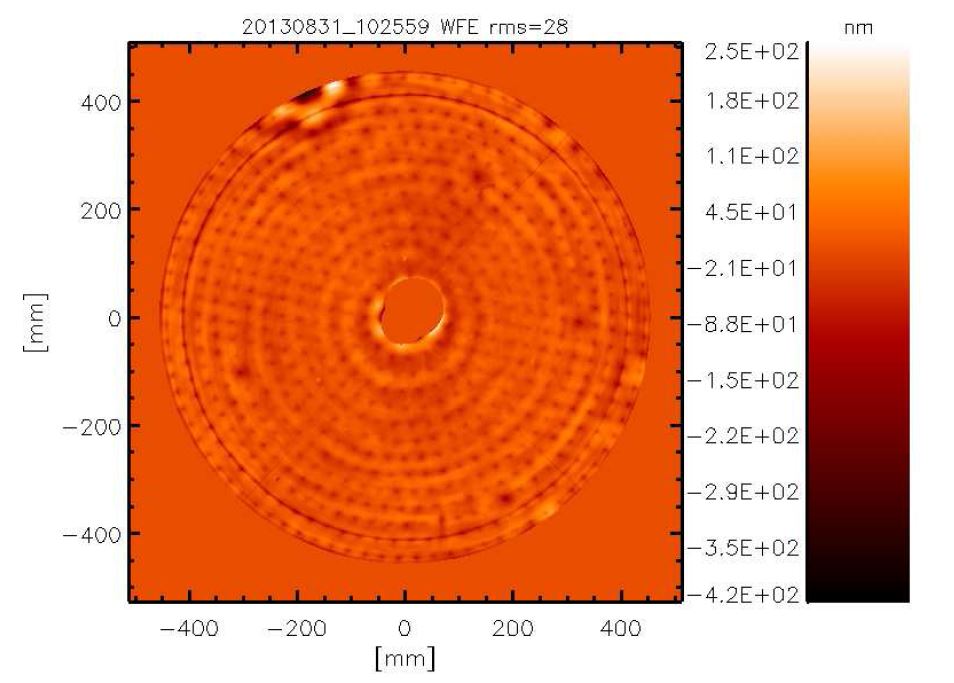 Ad-Sec-Dx can now be used as a non-adaptive secondary mirror for seeing limited operation. The retroreflector holder has been dismounted and the mirror will be used for the coming nights of engineering where the telescope and the instruments will be brought back to life and checked out after nearly two months of shutdown.

Meanwhile, our colleagues in Arcetri will work on the AO software to slave the actuators which will be behind the masked area. The next, and final, step will be the calibration of the unit in closed loop for AO corrections. Work on the telescope sould start on Sep 13.

It is anticipated that TS3, which is only a spare shell, will not work as well as TS4. However, it should still allow excellent AO observations on the right side of the telescope while we wait for ts4 to be refurbished (not an easy thing to do...).

Another excellent team work with participants from Arcetri (on Mt Graham or remotely from Italy) and LBTO!


Posted by the LBTO broadcaster at 4:43 PM No comments:

AdSec-DX ready to go on the telescope

The goal of the last phase of AdSec-DX lab work was to end up with a functional adaptive secondary unit integrated in its hub and ready to go on the telescope.

It all started on Monday (Aug 12). After removing the shell mini-skirt, the Opticote layer was removed with the unit in its zenith pointing orientation. The mini-skirt was then reinstalled. 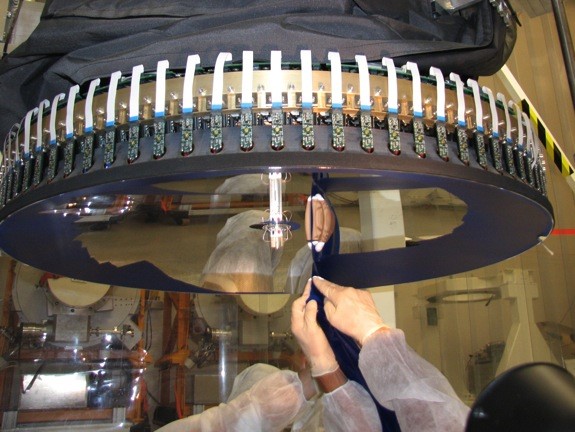 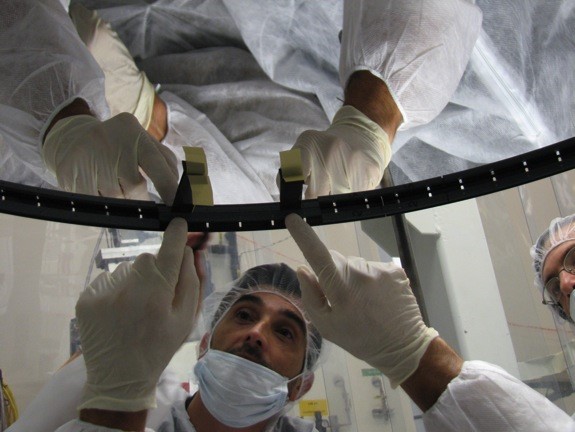 On Tuesday, the central cover was installed and the internal spacers adjusted to reach the goal of ~400 µm gap everywhere. The installation was done first in zenith pointing position, but then adjusted after having moved the unit in horizon pointing position to facilitate the measurement of the gap between cover and thin shell. 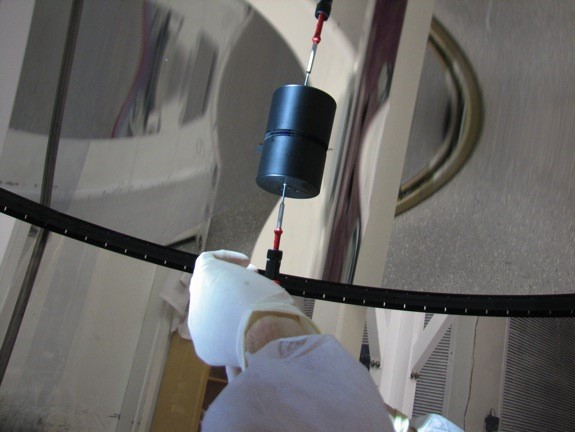 The unit was sealed and readied for installation in the hub. So far, so good!

A final check of the unit was performed, setting it flat and slewing the unit at different elevations. After a few successful slews from 90° to 20° elevation, the shell started to display signs of contamination between the shell and its reference in an area close to its outer edge, which would not go away after one more slew and a couple more attempts at setting the shell . 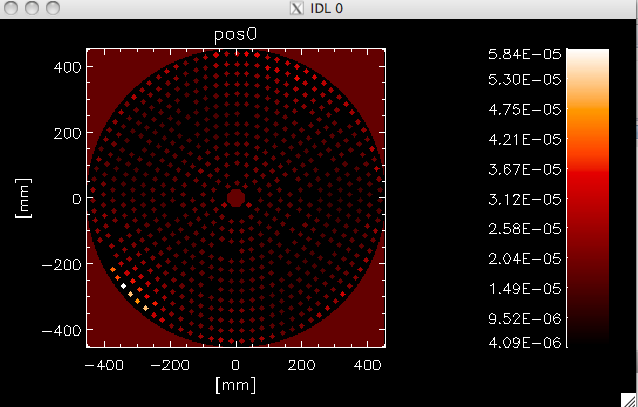 A clear setback for all involved. Unabated, the team just moved on for two more days of work, back to checking the shell and the reference body for the source of contamination and reassembling it again with more testing to follow!

What had just been installed the day before was removed, and the shell gently lowered on its foam tray, No obvious contaminant, like a 50µm size particulate, was found after a thorough examination of both the shell and the reference body. After a tedious removal of all visible FODs (like "foreign object debris"...), most of them around 10µm in size, the unit was reassembled and sealed again.

By Thursday night, the team was successful in completing the integration of the AdSec and testing the thin shell's membrane integrity. The results from these tests were consistent with the measurements made during last month's AdSec testing campaign.

On Friday evening, after one more day of work, the unit was finally in its hub! This last step went smoothly, and here is the result... 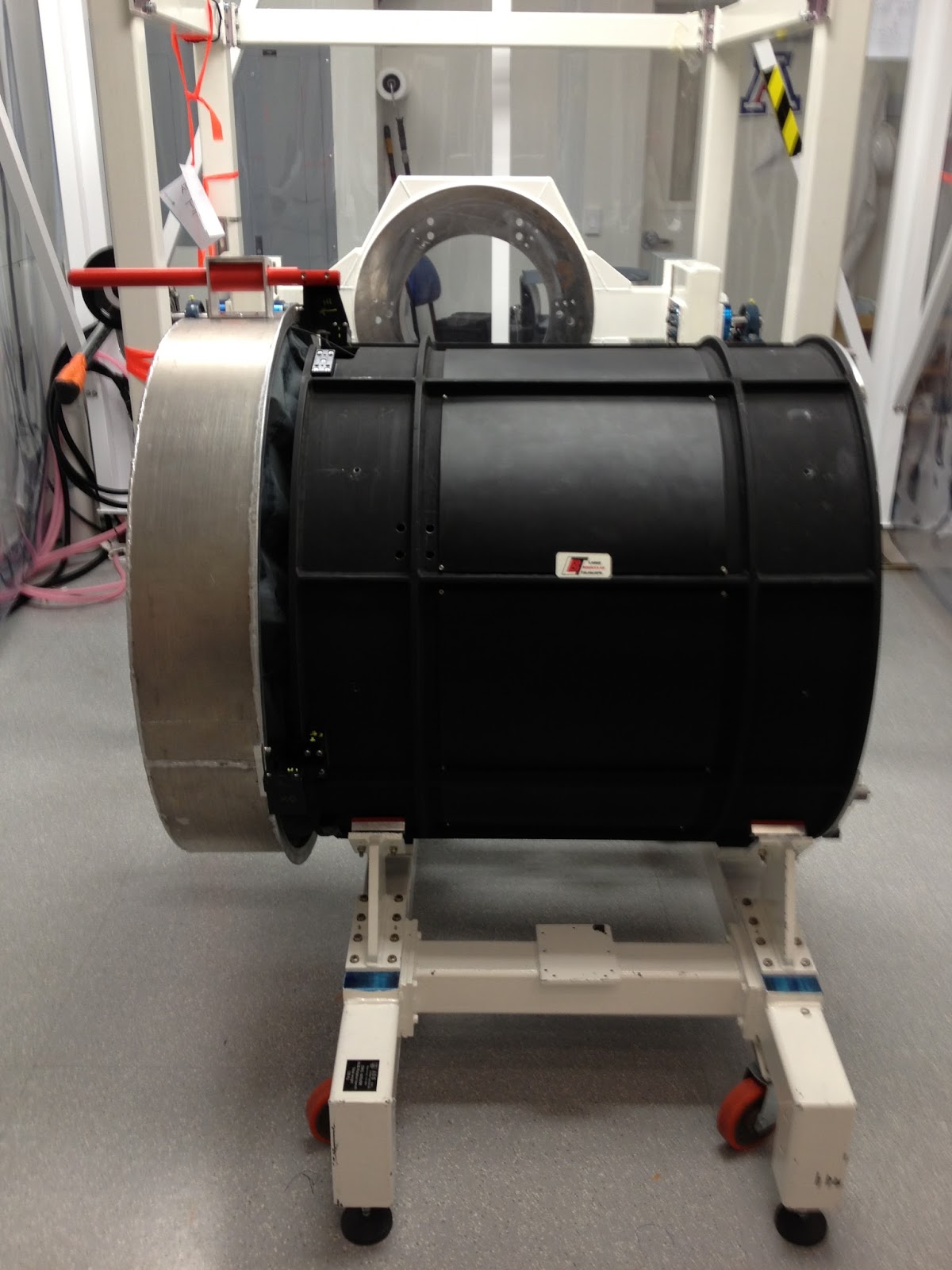 The units in its hub, ready to go on its swing arm

The hub is scheduled to go back on the telescope on Wednesday, Aug 21.

Kudos to the AdSec team of the week: Guido Brusa, Juan-Carlos Guerra and Michael Lefebvre!

Posted by the LBTO broadcaster at 10:59 AM No comments:

The AdSec-DX unit passed all its lab tests with flying colors and is now in the clean room tent on the integration stand awaiting its reintegration with the hub. An amazing achievement by an amazing team of people from Arcetri, LBTO, UofA, and MicroGate!

The last step of the lab tests followed the integration of a mylar patch over the mouse hole (a feature of the thin shell #4), which can be seen on the before and after pictures below before and after the patch was applied. 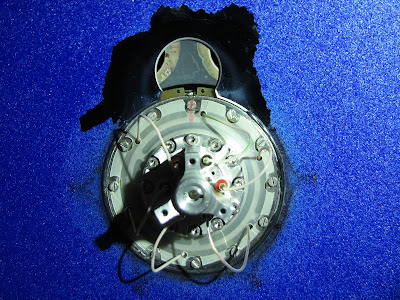 Before... the mouse hole is just above the inner hole of the shell.
Through the hole, one can see the reference and a couple of actuator holes under the shell. 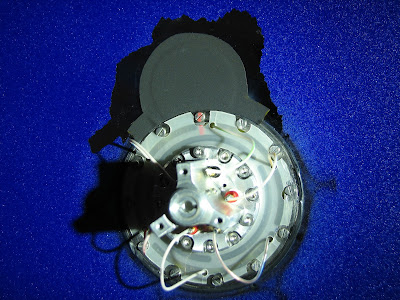 After... The hole is patched

The unit will be reintegrated on its hub in the middle of August and is scheduled to be back on the telescope around Aug 21 for a lot of day time work before seeing the sky after the shutdown and restart of the telescope, sometime in mid-September. Stay tuned...

In case you wonder what this mouse hole is about... TS4 developed a couple of fractures following an incident during the edging of the inner hole. These cracks were quickly stopped through drilling and then a circular hole (the mouse hole) was ground to remove the damaged area. Six years later, a patch was finally designed and installed to cover the mouse hole! 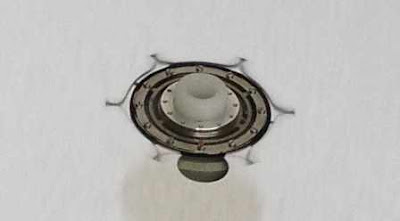 
Posted by the LBTO broadcaster at 6:31 PM No comments:

The shell is integrated.. and doing well!

The final goal of this week's campaign objectives were to integrate TS4 with the reference body and successfully flatten the shell.

The campaign objectives were met and the shell was flattened this morning (Jul 11). Further, the shell has been centered and the inner ring is secured. Additional tests were performed remotely from Italy to obtain a feed forward calibration matrix.

Kudos to the main players of the week: Roberto Biasi (MicroGate), Armando Riccardi (Arcetri), Michael Wagner and Michael Lefebvre (LBTO).
We are now closer to the ultimate objective of reinstalling the DX adaptive secondary on the telescope and getting back on sky.

Posted by the LBTO broadcaster at 5:01 PM No comments:

The unit has been electrically tested and after some actuator repairs, appears to be fully functional. All 672 actuators were successfully measured with a fixed capacitance, coil current checked, and replaced actuators were checked for correct polarity.

Next step: integration of the new thin shell (TS4) 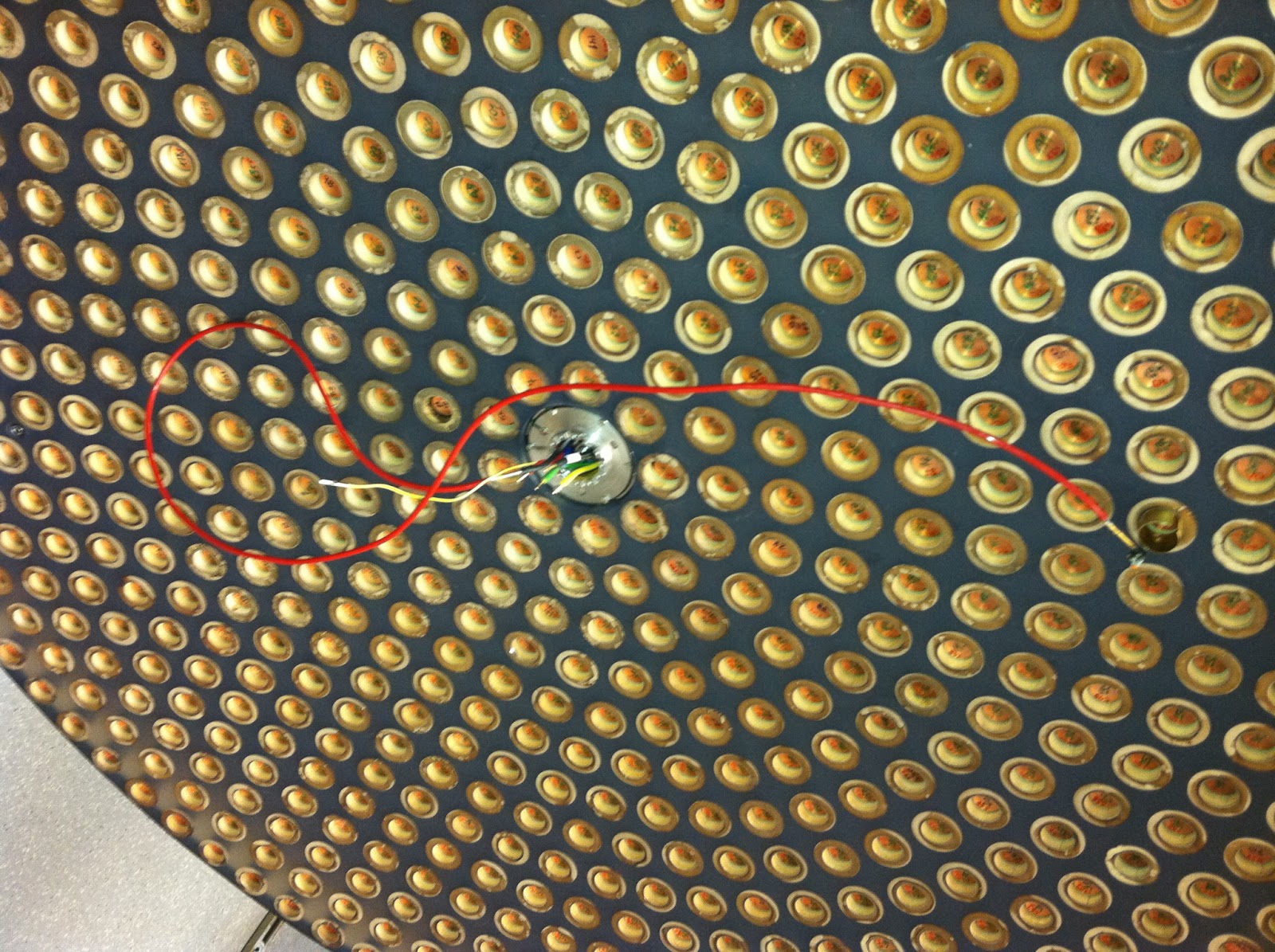 Testing the actuators one by one... 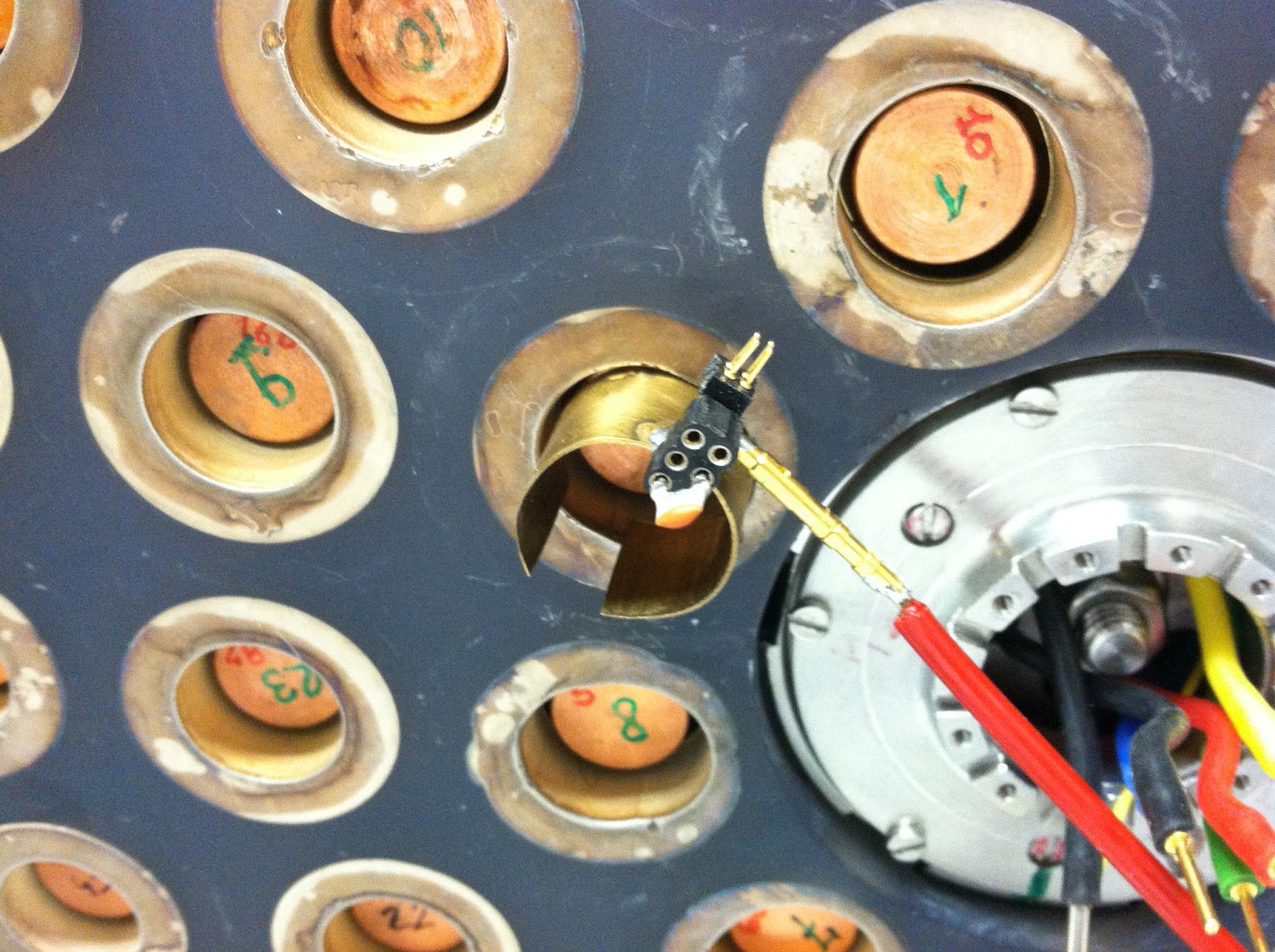 close-up
Posted by the LBTO broadcaster at 8:58 AM No comments: